The March 1867 issue of The Gentleman’s Magazine carried an obituary for Sarah Sophia Fane Child-Villiers, dowager Countess of Jersey: 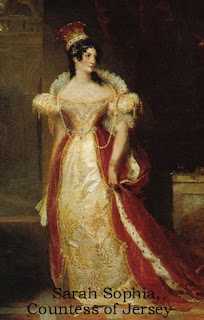 January 26 At 38 Berkeley Square, suddenly by the rupture of a blood vessel, aged 81, Sarah Sophia, Dowager Countess of .


Her ladyship was the eldest and only surviving child of John, 10th Earl of Westmorland, by Anne, only daughter and heir of Mr. Robert Child. She was born March 4, 1785 and in May 1804 she married George, Viscount Villiers, who in the following year succeeded his father the 5th Earl of Jersey, and by whom she had a family of four sons and three daughters. Her eldest son, George Augustus Frederick, died three weeks after the death of his father in 1859; and was the father of Victor, 7th Earl; Augustus John died at Rome in 1847; Frederick married to Lady Elizabeth, daughter of the 8th Earl of Athlonel (title extinct); Francis John died in May 1862; Lady Sarah, married to Prince Nicholas Esterhazy, son of his Excellency the late Prince, many years an ambassador to the Court of St. James’s, from Austria, died at Torquay in November 1853; Lady Clementia died unmarried in December 1858, and Lady Adela, wife of Lieut. Colonel Charles Ibbetson, who died suddenly in September 1860. 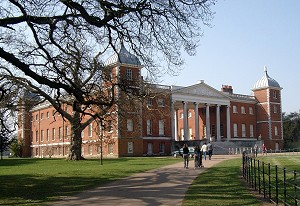 Osterley Park, Greater London
The late countess, on the death of her maternal grandfather, Mr. Robert Child, the banker, by his will succeeded to his large property, both real and personal. Owing to her mother having eloped with the Earl of Westmorland, Mr. Child carried out his determination that not a shilling of his property should go to the male heirs of the earldom, and he bequeathed his large and valuable property to the and his interest in the old banking house at Temple Bar to the countess. The deceased Lady Jersey was kind and charitable to the poor, but studiously avoided publicity in doing good to those beneath her. Many indigent families will regret her death, as well as an extensive circle of friends. 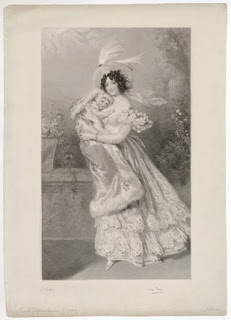 Lady Jersey, National Portrait Gallery
by Frederick Christian Lewis Sr, after Alfred Edward Chalon
stipple engraving, published 1839
The Countess of Jersey was for many years one of the leading ladies patronesses of “Almacks” and with Viscountess Palmerston shared the greatest influence; indeed she had for more than half a century occupied the highest position in society. She was a woman of extraordinary abilities and no female member of the aristocracy could surpass her in her knowledge of European politics. For nearly fifty years her saloons were nightly open to receive the distinguished foreign diplomatists of the day and the prominent political character of the Tory and Conservative party. The countess’s “at homes” were however, unlike those of Devonshire and houses, exclusively confined to a distinct political faction. Lord Brougham was a great personal friend of the deceased lady, and Viscount Palmerston was among her occasional visitors, even while in office. Lady Jersey was connected by marriage with the late Viscount Ponsonby, the late Marquis of Anglesey; the Earl of Bessborough and a large number of friends of opposite politics. 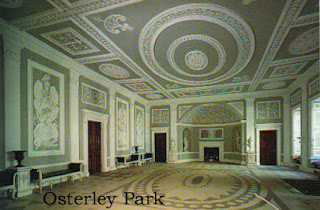 It was not until the death of her husband in October 1859, that Lady Jersey retired into comparative seclusion.—That is to say, sought only the society of her most intimate friends. The Countess was honoured by the personal regard of the late Emperor Nicholas, the late Kings of Hanover, Prussia, Holland, Belgium, and of George IV when Prince Regent. 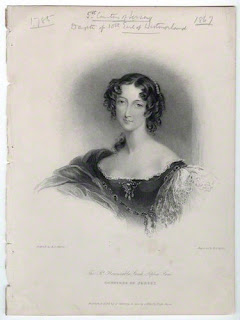 The interment of the deceased took place in the family vault of the parish of , Oxon on the 2d of February, the body of the Countess having been brought to on the day previous. The funeral procession was preceded by the principal tenancy of the estates.

Note from Victoria: The Jersey estate at Middleton, Oxfordshire, was the family's principal country home after its purchase in 1737, though the property had been a manor since the 13th  century. The house built there in the 1750's and used by Sarah, Lady Jersey, for extensive entertaining, was pulled down in 1934 and replaced a few years later with a modern house designed by Sir Edward Lutyens, now made into flats. The former Middleton Park grounds are now mostly a public park.  The village of Middleton Stoney boasts one public house, the Jersey Arms.