The Wellington Connection: The Koh-i-noor Diamond


The great diamonds of the world are as famous as the great mountains or rivers. Who has not read of the Koh-i-noor, the "Mountain of Light," which has been stolen from sovereign by sovereign for near a thousand years, its last proprietor—by title, at least, semi-felonious—being her Gracious Majesty Queen Victoria? Every body knows that the Koh-inoor first belonged to the god Krischnu. From him—poor, helpless god!—it was stolen by a wild Delhi chief, who wore it in his hat; from him by Ala-ed-Din ; from him, in 1526,-by Baber of the Moguls. To Aurnnzebe it occurred that the Koh-i-noor, like other diamonds, would be the better for some polishing and cutting. Unhappily, the diamond-cutter who received it in charge was unskillful. From 793 carats the blockhead cut it down to 186. Aurunzebe was for cutting him down on the same scale, beginning with his head; and really, in the interest of art, one can not but deplore the fellow's escape. It should have weighed at least 400 carats, and been worth  $500,000,000. As it is, it would not fetch more than the value of a couple of stout cities. A mere pebble. Nadir Shah stole it when his turn came; from his descendants it was wrenched by Achmet Shah; from his son it was extorted by Runjeet Singh ; and from his people it was " conveyed" by British troops, who loyally presented it to their Queen, who showed it to her people at the Great Exhibition of 1851. Her Majesty was not satisfied with its brilliancy, and had it cut again, this time by the great diamond-cutter, Costar, of Amsterdam, who reduced it to 106 carats.

The cutting marked an epoch. Costar and his men came over from Amsterdam for the purpose, and were installed at the Queen's jeweler's work-shop. A steam-engine was erected to do the work, and it was the Duke of Wellington himself who set the machinery in motion, and made the first cut. All England, through representatives in the press, was a breathless spectator of the thrilling scene. A single slip of the cutter's hand might have done a mischief not to be measured save by hundreds of thousands of pounds. A moment's inattention might have cost a million. Happily the operators' nerves were steady, and their thoughts concentrated on their work, so that no accident occurred. Long and loud were the controversies, to which the cutting gave rise—one party claiming that these Dutch Jews were ruining the finest jewel in England, others maintaining that without a new cutting the Koh-i-noor was comparatively valueless. 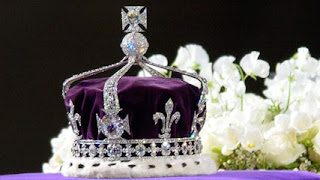 Whichever was right, Costar carried his point, and connoisseurs and the trade are now generally agreed that the cutting was beneficial. It is now a perfect brilliant, with duly proportioned table, facets, and culet. Its previous shape . . . was irregular—neither rose nor brilliant.