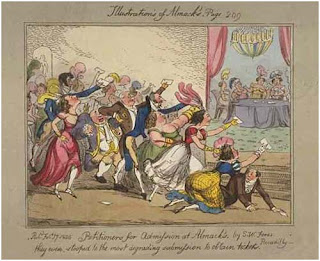 When Almack's Assembly Rooms, King Street, St. James's, opened on 13 February, 1765 Horace Walpole wrote: "The new Assembly Room at Almack's was opened the night before last, very magnificent, but it was empty; half the town is ill with colds." Apparently, the ton recovered quickly, for Almack's was soon touted as the epitome of all that was fashionable. Almack's boasted three rooms, where, for a subscription of ten guineas, one attended ball and supper each Wednesday evening during the twelve weeks of the London Season. However, before becoming a subscriber, one was first subjected to the scrutiny of the Lady Patronesses of Almack's, originally comprised of Ladies Pembroke and Molyneaux, Mrs. Fitzroy and Mrs Meynell and the Misses Pelham and Lloyd. Circa 1814, the committee was made up by the Ladies Jersey (Sarah, Countess of 1786-1867), Castlereigh, Cowper (later Lady Emily Palmerston d. 1869) and Sefton, the Princess Esterhazy and the Countess (later Princess) of Lieven. Mrs. Drummond-Burrell (later Lady Willoughby de Eresby) also served briefly. According to Ticknor's diaries, only one member of the committee acted as Patroness at a time, the post being filled by a rotation system.

Should an applicant not meet the approval of these ladies, he or she was turned down for membership. In addition, the rules were strictly adhered to, with the Duke of Wellington himself being turned away when he arrived at the Rooms in trousers, rather than the required knee breeches. Or was it because, as another story goes, he arrived after the hour of midnight? Appropos of this singular event, George Ticknor wrote that he and Lord and Lady Downshire, on their way to Almack's, stopped off at Lady Mornington's, where they met the Duke of Wellington. They asked him if he were going to Almack's and the Duke replied that "he thought he should look in by and by," upon which his mother told him that he'd better get there in good time as Lady Jersey would make no allowances for him. The Duke dawdled, Ticknor and the rest going on to Almack's without him. Later that evening, Ticknor was standing with Lady Jersey when an attendant told her, “Lady Jersey, the Duke of Wellington is at the door, and desires to be admitted." "What o'clock is it?" she asked. "Seven minutes after eleven, your ladyship." She paused, then said with emphasis and distinctness, "Give my compliments to the Duke of Wellington, and say she is very glad that the first enforcement of the rule of exclusion is such that hereafter no one can complain of its application. He cannot be admitted."

In any case, the Duke was not the only person of rank who was censored. A report dated 1765 runs: "The Duchess of Bedford was first blackballed, but is now since admitted, the Duchesses of Grafton and of Marlborough are also chosen. Also Lady Holderness, Lady Rochford are blackballed, as is Lord March." Captain Gronow records, "Very often persons whose rank and fortunes entitled them to entree anywhere else were excluded by the cliquism of the lady patronesses, for the female government of Almack's was a pure despotism and subject to all the caprices of despotic rule. It is needless to add that, like every other despotism, it was not innocent of abuses." Still, admittance was sought and the Rooms became, "a matrimonial bazaar where mothers met to carry on affairs of state; and often has the table, spread with tepid lemonade, weak tea, tasteless orgeat, stale cakes and thin slices of bread and butter - the only refreshment allowed - been the scene of tender proposals."

Subscribers to Almack's were allowed to bring a guest to a Ball, provided they passed m 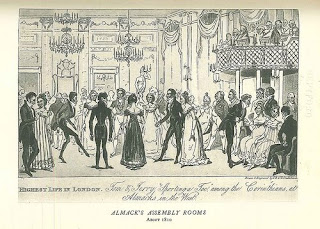 uster first. He or she had to call personally at the Rooms and were either granted a "Strangers Ticket" of admission or were blackballed. The Rooms were open for supper and gaming, with dancing lasting the night. Once supper had been served at eleven o'clock, the doors were closed and no one else was admitted for the evening, regardless of rank or reputation. Once you had been approved by the Lady Patronesses, your social standing was guaranteed to soar. Fortunate young ladies making their first London Season and who'd been allowed to 'come out' at an Almack's ball had their dancing partners personally chosen by one of the Ladies. A passage from Lutrell's work "Advice to Julia" concerning Almack's reads:

"All on that magic list depends;
Fame, fortune, fashion, lovers, friends;
`Tis that which gratifies or vexes
All ranks, all ages, all sexes.
If once to Almack's you belong,
Like monarchs, you can do no wrong;
But banished thence on Wednesday night,
By Jove you can do nothing right."

The ballroom was partitioned off for the dancers by crimson ropes. In 1814, the dances at Almack's were Scotch Reels and English Country dances and the orchestra, being from Edinburgh, was conducted by the celebrated Neil Gow. During the early Victorian era, Weippert and Collinet’s band provided the music. It was not until 1815 that Lady Jersey introduced the French Quadrille to the Rooms, about which Mrs. Arbuthnot wrote on in a letter on June 22, 1823 . . . . “I went two nights ago to a costume ball at Almack’s for a Welsh charity. It was very brilliant & there was a quadrille that was beautiful. All the prettiest girls in London were in it, such as Ly A. Hervey, Miss Poyntz, Miss Stewart (natural daughter of Ld Granville & the late Lady Bessborough) Miss Foresters, Miss Beresford, Miss Howard. The men were in regimentals & each wore a bouquet. The quadrille, however, gave great offence, for they danced together all night & took the upper end of the room, which was considered a great impertinence. They were dressed in 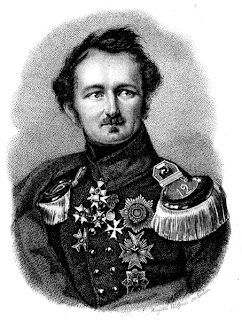 caps & flowers with a chip Swiss hat at the back of the head, scarlet bodices & white petticoats trimmed with scarlet ribbons & flowers. All the Royal Family were there, & it was altogether a very grand concern.”

Around this same date, Prince Puckler-Muskau, (pictured at left) a visitor to London whilst on the hunt for an heiress to marry, offered a fresh perspective on the Rooms in a letter he wrote on April 26, 1825, “The first Almack’s ball took place this evening; and from all I had heard of this celebrated assembly, I was really curious to see it: but never were my expectations so disappointed. It was not much better than at Brighton. A large bare room, with a bad floor, and ropes round it, like the space in an Arab camp parted off for the horses; two or three naked rooms at the side, in which were served the most wretched refreshments; and a company into which, spite of the immense difficulty of getting tickets, a great many `Nobodies’ had wriggled; in which the dress was generally as tasteless as the tournure was bad; - this was all. In a word, a sort of inn-entertainment: - the music and the lighting the only good things. And yet Almack’s is the culminating point of the English world of fashion."